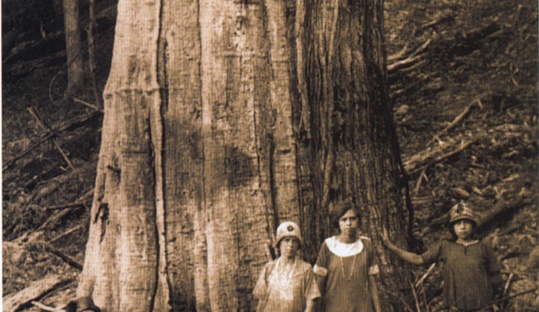 It’s been a bit ‘nutty’ trying to source local edible chestnut cultivars. What was once the most popular source of starch in the Americas (twice the amount of a potato), the humble chestnut, or ‘bread tree’ has never fully recovered from the devastating Asian blight that wiped out this staple food in the early 20th century.

We’ll never be able to grow the towering and majestic Castanea dentata (American chestnut) again. Instead we must settle for the much smaller, highly fungus resistant Chinese chestnut cultivars. Our top criteria in selecting  cultivars were for trees that would be well suited to a mixed orchard and would guarantee some of our most desirable characteristics – large nuts; blight resistance; reasonable annual cropping; early ripening.

We started our search for grafted chestnuts with numerous calls across tree farms in BC and Washington state. It took a while before we realized that unlike the other nut varieties available as grafted cultivars on black walnut root stock – our chestnuts will need to be seedling tree stock. Graft compatibility is a serious problem with chestnuts, and just as in human organ transplants, there is delayed transplant failure in chestnut trees. Seedling trees it is! Unknown nut quantity/quality it is! No wonder there are no large commercial chestnut growers on the coast! 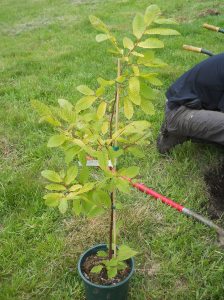 Today we planted a small initial block of chestnuts in the field that are ‘molissima’ or ‘x’ cultivars of the Chinese variety. These trees are far less demanding than the walnuts at planting time. They like the pH just as it is – 5.8 and won’t mind the sandy loam portion of the field they are being designated to.

At 20 foot spacings we’ll be closely monitoring each tree and marking the outstanding ones for production and blight resistance. 40 more will be planted this fall. Over time we recognize our role will be to fill in the gaps of the weak, blight susceptible specimens and select only the hardiest of trees. The chase for the most suitable chestnut is on!

We'd love to hear from you: Cancel reply